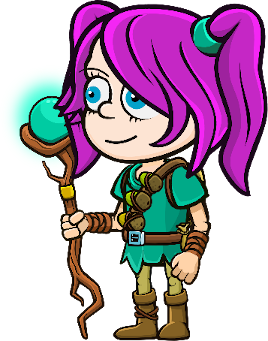 Very little room. Room. I need room to jump. A head wobble produced a flurry of pink hair which settled perfectly in place amongst two roughly tied ponytails. Deep light blue eyes flickered on sloping forest floor. The smell of fresh trampled undergrowth hinted at presence of a menace. Perhaps a few menacing sorts, Xyla thought. She was moving steadily and checking each couple of feet for traps or any signs of her foe.

Xyla could smell another consistent stench. It started a few minutes ago and was getting stronger. The nauseating odour stood out from the crushed flora as it stayed in the air and did not mix with the ground smell. Two separate beasts. Spying a long gap in front of her she checked behind her... the attack came in like an angry Snaggle beast. Swift and considerably challenging. Xyla leapt and pounced on the Blue Shroom of Doom and bounced away to relative safety. Checking for damage on the shroom she sighed. It was still kicking, 'Is that all you have, weak very weak,' shouted a shroom who seem dishevelled after the last attack.

Xyla was over this already and needed to get through this so she could deal with whatever was making that stench in the air. Time to get things moving, she thought. As a last resort Xyla is trained in the Forest Agency art of acorn flinging. Xyla reached behind her and equipped herself with the Forest Flinger 4000. Checking ammunition, she charged the flinger with a small spoken spell, aimed and flung the acorn at the annoying blue 'shroom.

The 'shroom wore the acorn straight to it's earless facial features. It bopped and was stunned momentarily. It continued its menacing march towards our pink haired protagonist.

'Oh, just return to the forest floor you not so fungi,' Xyla yelled at the upset 'shroom. Ignoring the terrible pun, a creature in flight appeared above the blue 'shroom. 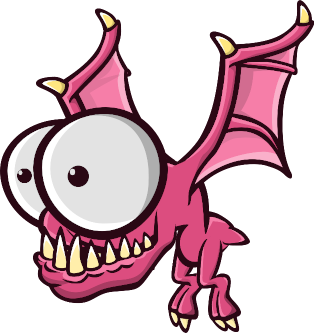 The odour as powerful as death continued to permeate the air. Xyla jumped backwards and then cast a double jump spell propelling her to a safe distance away. The sound of fierce flapping shifted her memory banks back to forest fiend training at the academy. Xyla had another sniff at the air. Changing room odour mixed with decaying compost heap. Yep, the Pink Punk. Evasion the key.

Having formulated a way to removing these two unwanted foes she moved quickly. Jumping straight at both the Pink Punk and the bulbous blue 'shroom she jumped directly on the unaware shroom flattening it into the densely packed undergrowth. Need to come back for some ingredients, she thought, 'shroom omelette being her favourite midmorning meal. A sound of flapping wings and a guttural moan was followed by a stench to crush small dreams. This rude occurrence woke her from her recipe filled daydream and invoked a call for action.